Dolemite Is My Name is a brilliant look into the life of African-American icon Rudy Ray Moore played by Eddie Murphy in a career best performance. Moore is a man of many talents: acting, singing and stand-up. His comedy routines are his way into fame as he channels an alter ego Dolemite, a pimp style man of the 70s who speaks in rhyme and quickly builds up a fan base within the African-American community across the US. The film specifically follows his rise to stardom and the production of his first film Dolemite, a blaxploitation feature in which he plays his comedic alter ego. Directed by Craig Brewer and written by Scott Alexander and Larry Karaszewski, Dolemite is my Name marks a welcome return to Eddie Murphy as a leading man on the big screen and also boasts a brilliant supporting cast with Craig Robinson, Tituss Burgess, Keegan-Michael Key and Snoop Dogg. It’s brash and upfront, unafraid of its subject and showing just how far one will go for their time in the spotlight. The writing is spectacular and even the scenes where Moore isn’t speaking in rhyme almost have a poetic quality to them. Every pause and interaction has a flow that works brilliantly in the film and the characters interact naturally. You completely believe and engage with the characters and at no point are drawn away from the film. The direction is quick and sharp with eye-catching colour palettes that exemplify Moore’s even more colourful personality. Everything about this film was completely wonderful to watch.

In a sea of biopics, it would be easy to miss this one which seemed to sneak onto Netflix without fanfare but that would be your loss. Moore is a man who loves the limelight and will do anything to get it. He will do whatever it takes to become famous even if it means nudity, violence or strong language. He isn’t afraid of vulgarity and thrives on the offensive nature of his content. Who better to play such a controversial figure than Eddie Murphy? Murphy allows himself to embrace all aspects of Moore’s personality from his strong bravado to his insecurities and flaws. He has left no stone unturned in his preparation and the result is a captivating and stunning performance that does the Moore legacy proud. I hope Murphy continues releasing films like this that show his talent and range as an actor. In this film alone, he has to sing, act and perform stand-up as a man who is himself portraying a character. That is tricky to pull off and yet Murphy seems to do this effortlessly. This is a film that has a big cast list and yet Murphy is the draw and the centre of attention at all times. There aren’t many moments when he isn’t onscreen and yet his presence is anticipated and felt. Of course, this is only natural since it is a biopic on his character but it really is a magnetic performance.

As mentioned before, the supporting cast is crammed full of amazing talent. If I had to choose one that stands out from the rest, it is probably Keegan-Michael Key as screenwriter and actor Jerry Jones. Jones is an earnest playwright who makes films that explore racism in modern society. When initially approached by Moore to write the screenplay for the Dolemite movie, he is reluctant to jump onboard but is eventually taken in by the scope of Moore’s fanbase. His reactions during and after filming the sex scene for the movie is priceless. Jones is a character who is taken way out of his comfort and it initially makes him seem like the only sane person in a crazy bunch but eventually he allows himself to have fun with it. I also really enjoyed Craig Robinson’s appearance as Moore’s friend, Ben Taylor, who provides the theme song for the Dolemite movie. His role is only small but when he is onscreen, it’s wonderful to watch. The character of Taylor is great to watch as it shows his support from before Moore’s fame and ascension. The supporting characters really do support one another. It is a film that, although centred around one individual, tells the stories of multiple people. One touching story is Lady Reed (Da’Vine Joy Randolph) who is cheated on by her husband and doesn’t know what to do with her life. Alongside Moore, she stars in the film and joins him on the stage for stand-up. Although she is assisted by Moore, Lady Reed is strongly independent and isn’t afraid of sticking up for herself and her beliefs. The scene in which she thanks Moore for putting a plus size woman of colour onscreen allows Moore to realise that his project goes beyond entertaining people.

Although it has grabbed the attention of awards panels, particularly Eddie Murphy’s performance, it feels as though Dolemite Is My Name has been swept under the carpet. This could be due to Netflix’s loyalty to its other release, The Irishman, and so they have pushed that far more. In truth, I prefer Dolmite Is My Name as a film because it feels like something new and unique whereas The Irishman brings out what Scorsese does best but nothing that we haven’t seen before. I hope that if anything Murphy gets an Oscar nomination because it would be a real shame not to acknowledge the brilliant work he does on this film. 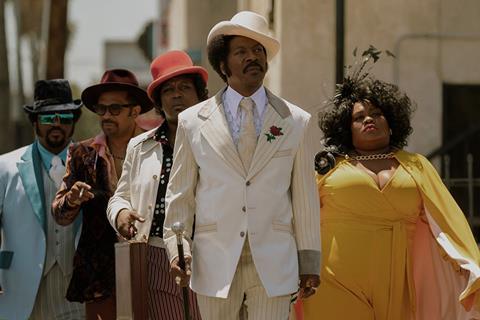 In a climate that has seen a rise in racism and extremist politics taking hold, Dolemite Is My Name is a film that is desperately needed. It is thoroughly entertaining and provides plenty of laughs but it equally holds no punches in its subject matter and isn’t afraid to explore the darker truths of society. It’s interesting to think that such a diverse figure such as Moore was renowned and accepted in the 70s but the struggle and work he had to put in to get there is testament to the struggles that African-Americans face on a regular basis. I hope that there are more films like this released in coming years as it is so important to present stories from all walks of life.

What did you think of Dolemite Is My Name? Let me know in the comments below!