Hayao Miyazaki’s 1986 family action film, Castle in the Sky was the first film made under the Studio Ghibli brand (Nausicaä of the Valley of the Wind was made before Ghibli’s inception although it is now included in the Ghibli catalogue). The film follows young orphan Pazu who catches a girl, Sheeta, after she falls from the sky and their mission to find the mysterious floating island of Laputa. Running up against pirates, the army and government, Pazu and Sheeta are thrust into a world full of corruption, greed and the abuse of nature. The world is crumbling thanks to the adults and it takes their childlike view to right the wrongs. On one level, the film is an engaging action movie that features extensive chase scenes and a variety of exciting locations. On a deeper level, the film can be explored as an analytical portrayal of mankind’s war on nature and the importance of working with nature and not fighting it.

What Ghibli achieves brilliantly in all of its films is that the films are never patronising to the audience. There is always something to think about. Even the child-friendly films like My Neighbor Totoro include undercurrent themes of death and loss. With Castle in the Sky, we are following two protagonists who don’t have families of their own but are there for each other throughout. That in itself is a hard fact to swallow as the characters are barely 10 years old and yet they survive with no complaints in this corrupt universe. When thinking of the most iconic Ghibli films, it’s easy to think of the likes of My Neighbour Totoro, Whisper of the Heart and of course the Oscar-winning Spirited Away, but I think somewhere Castle in the Sky has been lost in the conversation. There is something about this film that centres of the childlike vision that Ghibli likes to explore but blurs the lines by incorporating flawed heros and insightful dialogue. Every time I watch this film, I feel equally inspired and affected as the passion behind this film is impossible to ignore. 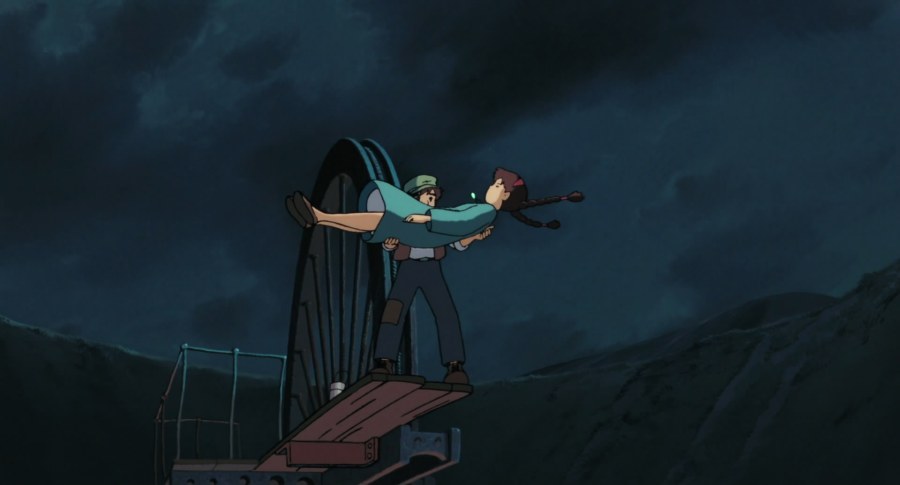 Aside from the two protagonists, there are several parties who aim to find Laputa first. A group of pirates led by matriarch Captain Dola who is a fantastic character. The only female on the ship that includes her husband and multiple sons, Dola smashes the patriarchy and in many ways is a more fearing character than the actual villains. The pirates’ encounter with Pazu and Sheeta shows that they are not your typical blood and guts pirates as the film want you to believe but show that they do have a heart. Although I do prefer to watch the Japanese original with subtitles, I do have to mention the voicework of Cloris Leachman in the English dub. She becomes Dola and gives the character this commanding quality with an undertone of softness that makes the shift in storyline believable. On the other hand, we have Muska, a government agent who is consumed by the idea of power that he is willing to betray all those who work for him to climb to the top. Initially, Muska seems rational and good-natured but his plans are soon revealed as he plans to use Laputa as a military weapon of destruction.

The animation is spectacular and sets the standards for Ghibli films of the future. Incorporating a steampunk aesthetic with classic anime styles, Castle in the Sky becomes an oxymoron in scenery. It is so clearly an alternate universe but not wholly outlandish. The world the film inhabits could be described as a grounded fantasy. This could be because the issues explored in the film are very real issues but through the metaphor of Laputa, a physically and figuratively detached land that represents a country before military invasion. One recurring feature in Ghibli films is the satisfying attention to detail such as the intricate blades of grass, beautiful colour mixtures and palettes and food that makes your mouth water. There are so many beautiful aspects in this film but the most stunning creation has to be the robot and particularly, the robot who lives among the natural world within Laputa. It’s a contrast that flows together seamlessly and has formed one of Ghibli’s most recognisable icons.

My favourite part of any Ghibli film is by far the score and in particular, the scores composed by Joe Hisaishi. I would class Hisaishi as an unsung hero in Ghibli history as his music encompass the magical qualities that the films possess. The music for Castle in the Sky is no different and in fact ranks highly for my all-time favourite scores. Each character has their own unique piece of music and even the crystal has a distinctive piano run that sounds like a twinkling star. Every piece is beautifully crafted but for me, the highlight of this tremendous achievement is the track that follows the Forgotten Robot when Pazu and Sheeta arrive at Laputa. The track is haunting yet full of hope and keeps qualities of the Laputian themed music that has been featured up this point. In the dub, there were improvements and additional tracks included that elevate the experience even more although the original Japanese is still just as beautiful. The music overall is classic and traditional in style until we get to moments of conflict were synthesizers are included and bring a more fantastical element into the mix. The soundtrack reflects the themes of the film. 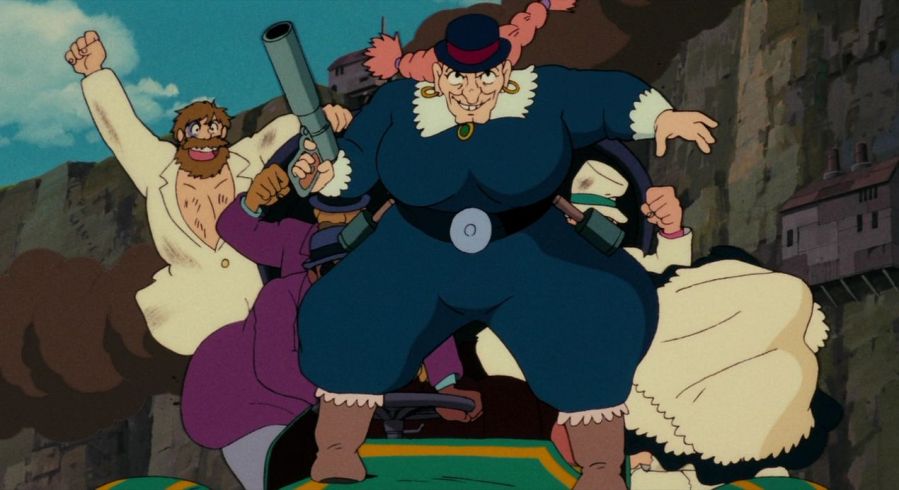 Picking a highlight scene is difficult for this film because I find it so captivating throughout but in a situation where I am forced to choose, it would be Pazu and Sheeta’s entry into Laputa. Entering the vortex in their tiny glider, they venture into the eye of the hurricane and are forced to endure heavy thunder and lightning. It’s an exhilarating scene to watch as the traditional scenery is stripped away and makes way for a black background with flashes of purples and white. The audience is taken to a different realm and it is reflected in the quick change in pacing, music and perspective as the glider becomes even smaller among giant lightning strikes. It’s a brilliant scene that is then beautifully contrasted with the sudden break as they float down to Laputa and everything seems back to normal. The angry and defensive nature of the weather is a representation of Laputa hiding itself behind the mask and reputation it has gained as a weapon.

What do you think of Castle in the Sky? Which Ghibli film is your favourite? Let me know in the comments below!