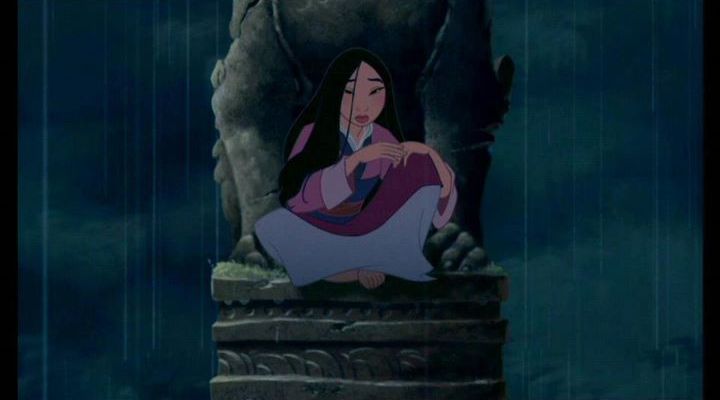 Now we’re on the end of the Disney Renaissance period and this subsequently lead to a dark time in the Disney repertoire as money seemed to become the main motivation for film production rather than the artistry or vision which Disney had wanted to push. It begins with the attempt to better Fantasia with a bigger budget but little imagination in Fatasia 2000 and this rut continues for the next decade so it will be on a couple of blogs.

As always, here are the links to the previous posts in case you need to catch up

Taking inspiration from the legendary woman who disguised as a male soldier so her disabled father didn’t have to fight in a war, Mulan is a story of courage and strength. In line with the Disney brand, darker themes are outbalanced by lighter entertainment in the form of her animal sidekick, Mushu (voiced superbly by Eddie Murphy). The film is home to my favourite Disney song “Make a Man Out of You” which I always belt out whenever the film is on (and admittedly, even if the film isn’t on). It’s not without its flaws as like its predecessors, Mulan has a tendency to fall into an array of Chinese, Japanese and Korean stereotypes just to name a few. It feels like a mesh of cultures rather than a positive fixation on Chinese culture. This could be why the film wasn’t successful in China. However, for all its faults, there is something about this film that I truly love. Mulan is not a typical Disney princess. She disobeys her father’s orders and is instantly an outsider in her community. She simply does not fit in. It is only when she impersonates a soldier that she finds her true destiny as a hero and saves China from the Hun invasion. Of course the film follows the traditional Disney trope of a love story between her and Captain Shang but this feels secondary to her mission in a way that love stories haven’t taken centre stage in Disney before. Granted that it is far from a perfect feminist portrayal but it is a huge improvement from the other Disney princess offerings that Disney were producing at the time.

Tarzan is the first Disney film I ever saw in the cinema and I remember being swept away on my booster seat by the animation and adventure this film brought. The songs (written by Phil Collins) are absolutely fantastic and the sequences of Tarzan riding through the trees are spectacular. The story of the boy raised by gorillas in the jungle who befriends English travelers, including the ever-so-posh Jane who he falls in love with. The film definitely has its highlights such as the scene in which Turk, Tarzan’s gorilla best friend and company break the goods in the camp the travelers had set up. The antagonist in this film comes in the form of Clayton, a hunter who has arrived with Jane and her father and aims to hunt down the gorillas. The climatic scene is tense and was scary to watch as a child as we watch Clayton’s demise in a fairly gruesome manner. The film does have its share of mild violence and the audience is shown this in the opening scene when Tarzan’s parents are killed by a jaguar. The animation team takes advantage of the details that are allowed in modern animation that wasn’t available when films like The Jungle Book was being made. 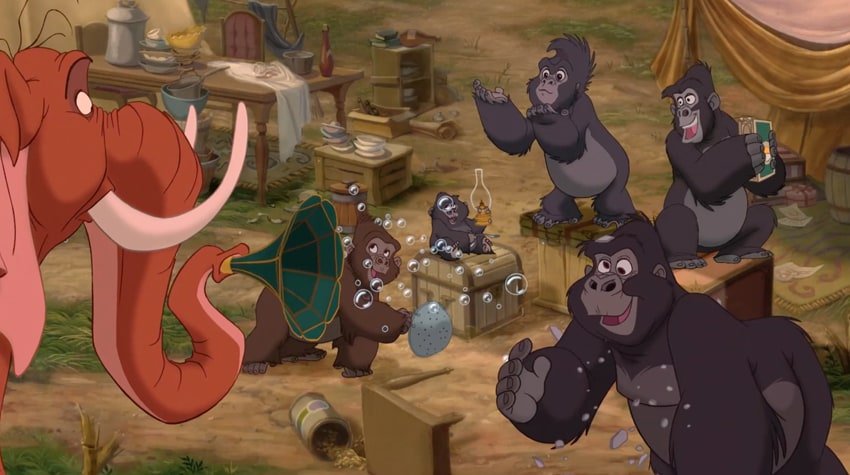 Ringing in the new millennium with a revived look at one of Disney’s most iconic films. Fantasia 2000 is bigger than its counterpart boasting a massive budget of $80-85 million; however, when watching the film, it seems that its only goal is to surpass the legacy of the original. It seems to be a film about celebrity and hype rather than heart and substance which the original has in spades. Instead of one narrator who briefly discusses each piece in between segments, there are celebrity introductions such as Quincy Jones and Angela Lansbury and they tend to go on for a while. Fantasia 2000 also features “The Sorcerer’s Apprentice” from the original but the other segments are completely new. Following the original’s concept of, abstract, character driven and plot driven stories, it seems that Fantasia 2000 is a poor copy of its predecessor and feels a bit pointless in creation. This isn’t to say it is bad but much like The Rescuers Down Under, it seems like a rehash of a classic that doesn’t need fixing in the first place. 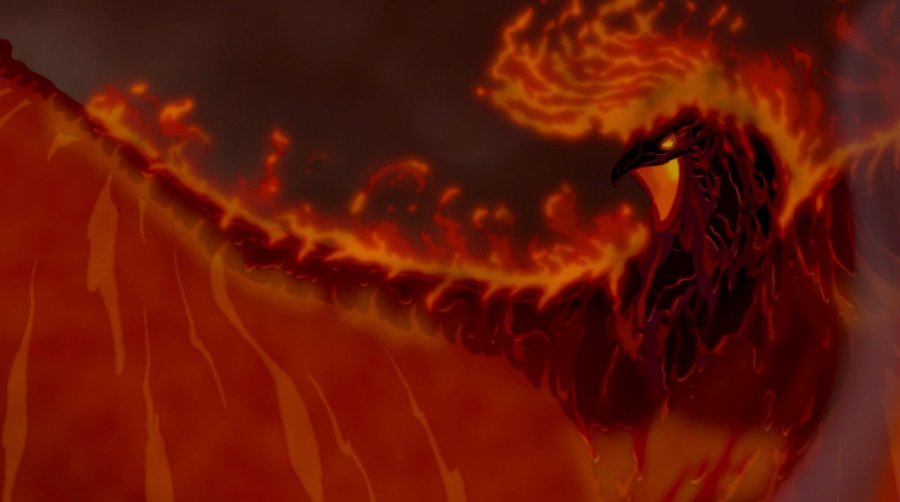 Another film that I remember vividly seeing in the cinema and loving to pieces. For the time it was released, the animation was really progressive and looked stunning, particularly the meteor shower scene. Inspired by the evolution segment in Fantasia and following the dinosaurs following the meteor shower and the fight to survive, we follow Aladar and his search for a new home with his lemur friends. Watching it when I was younger was a fun experience. It’s a simple story with basic characters but you can tell the huge budget went on the style rather than substance. This is where the flaws come in watching it as an adult. I’m now at a point where a film has to really be revolutionary in style and look fantastic to make up for basic characters but the animation now looks dated and sadly doesn’t fix the poor writing or character development. It is such a disappointment because I enjoyed it so much as a kid and re-watching the films now, I actually find that I enjoy it the least. The film

A favourite among the millennial audience, The Emperor’s New Groove is the hilarious story of the selfish Emperor Kuzco who is turned into a llama by his advisor, Yzma. He awakes in a village he threatened to knock down for a pool house and together with village chief, Pacha, he has to make his way home and stop Yzma from ruling the kingdom. The kingdom isn’t specifically named but it appears to be a mesh of Aztec and Mayan culture which makes it similar to Mulan in that respect; however, because the era and place isn’t specified, this aspect isn’t made as obvious to the audience in the way that Mulan was. The animation reflects Aztec art with sharp lines and regal colouring, golds and purple decorate the palace in abundance. It’s a bizarre film that sees the sarcasm turned up to a ten and the quirky humour can be off-putting to some but it seems to be a real hit with millennials. I love the writing in this film and how bizarre it is and a big special mention to Eartha Kitt for her amazing voice work as villainess, Yzma. One part evil and another part theatrical, Yzma is one of the most underrated villains in Disney. Accompanied by her sidekick, Kronk, she is even more detached from the public than Kuzco which makes for some comical moments in the film such as when Pacha’s family prank them both. 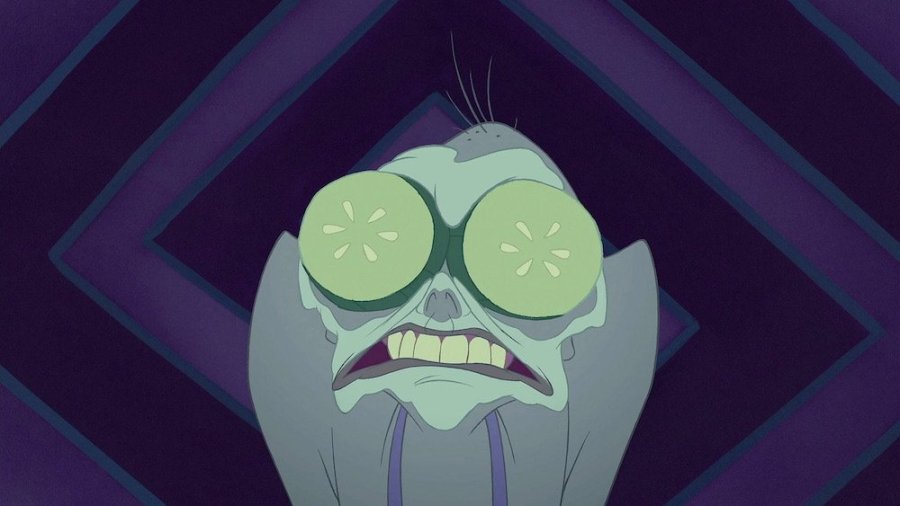 The list is getting huge now and I’m surprised with myself by where some of these have placed. Not long to go now until we’re up to date with the Disney catalogue with the newest offering, Frozen 2 being released later this year. It’ll be interesting to see where that will place. Now onto the important part of the blog!

Here is my ranking:

Tune in for my next post where I will be delving further into the dark period of Disney where we look at films that were critically and commercially panned across the board. These films are not among Disney’s highlights but they soon make way for a new wave of modern masterpieces in the same vein of the Disney Renaissance.

What do you think of the ranking? What would be your number one choice? Let me know in the comments !