Studio Ghibli is a film studio renowned for its creativity, passion and maturity. There are no limits to the imagination. From the iconic characters such as Totoro and the Catbus from My Neighbor Totoro (1988) to the architectural brilliance such as the bathhouse in Oscar winning Spirited Away (2001) or the castle in Howl’s Moving Castle (2004), it’s impossible to watch a Ghibli film and not be impressed by the scope and detail.

I wrote a top 5 Ghibli film list a couple of years ago on my previous blog and looking back, I wonder how I managed to pick 5 at all. Of course Castle in the Sky (1986) is my all time favourite but there isn’t a Ghibli film that I don’t think fondly of. The worlds created by studio icons Hayao Miyazaki and Isao Takahata (who sadly passed away last year) have become ingrained in the minds of people of all ages and backgrounds. The genius of Ghibli films lies in their ability to connect with anyone who watches them.

Miyazaki films are renowned for the large scope in world building. On the surface, the films are filled with such groundbreaking imagination that anything is possible such as Spirited Away and Howl’s Moving Castle. A trait of Miyazaki (particularly his earlier work in the 80s and 90s) is his underlying discussion on mankind’s treatment of nature. He incorporates this subject through various contexts whether that is through sci-fi/action (Castle in the Sky), dystopic (Nausicaa: Valley of the Wind) or a historical Japanese setting (Princess Mononoke).

Takahata’s film are formed by Japanese heritage and history. His worlds are usually formed by the real world with his most well-known film being Grave of the Fireflies (1988), a traumatic biopic about a teenage boy and his younger sister struggling to survive in World War II Japan. The opening alone is enough to break even the hardest of hearts. My favourite of Takahata’s is his swansong, The Tale of the Princess Kaguya (2013), a retelling of Japanese folklore about a baby who is found in a bamboo stalk. It is a beautiful piece about a woman’s place in society and is mixed with magic and tradition and yet seems so unique and groundbreaking at the same time. 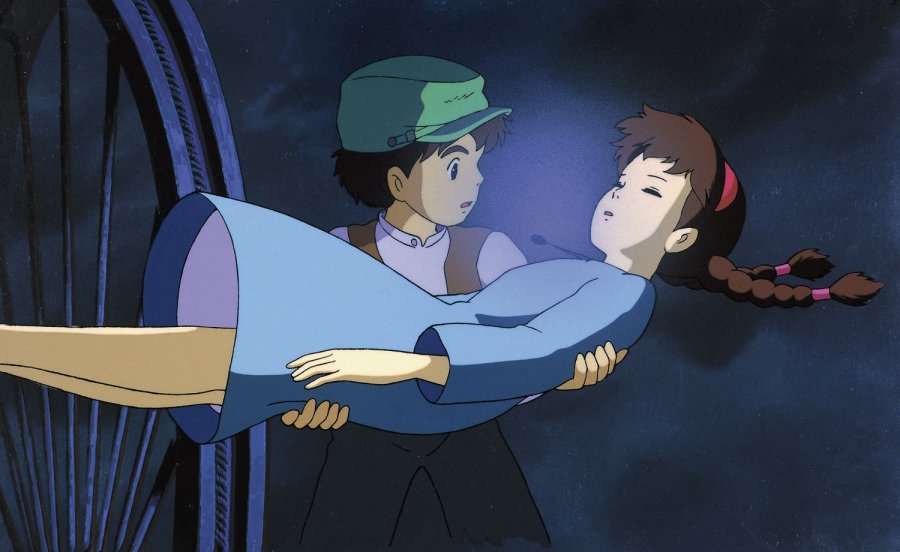 As I said before, Castle in the Sky is my all-time favourite which I know is probably a very different choice from most people. When Sheeta, a young girl on the run from the authorities and pirates, falls from the sky and is found by young miner Pazu, they team up to find the floating Kingdom of Laputa, a castle in the sky. I remember the first time I watched it and was taken aback by how original it was and to me it was (and still is) a flawless film. The weird thing is that I am aware that it isn’t the “best” Ghibli film (I think that would probably go to either Whisper of the Heart or Spirited Away) but there’s a beauty in Castle in the Sky in how brilliantly huge the imagination is so early on in Ghibli’s career. There’s a fearlessness in how the film isn’t afraid to include flawed heroes and complex primary and secondary characters. Also, the music by Joe Hiasaishi (who is also a Ghibli icon) is nothing less than stellar.

What are your favourite Ghibli films? Let me know in the comments below!